Monticello is among the most enduring symbols of American history, offering a tangible connection to the nation’s founding. A view of it is embossed on every nickel.

The sense of permanence that Thomas Jefferson’s home conveys stands in stark contrast to the way the seasons perpetually reshape the landscape around it. Through her work and her art, Eleanor Gould (Arch ’10) explores the beauty she finds in that tension. 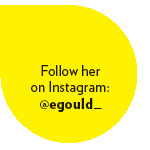 Gould, who earned her master’s degree in landscape architecture at UVA, has been curator of gardens at Monticello since 2013. She divides her time between the usual gardening tasks—weeding, planting and harvesting—and researching the gardens, leading tours, developing programs for the public and taking photos of the estate for Monticello’s digital archive.

Over the past four years, Gould has also brought Monticello to a far-flung audience through photographs that she posts to her Instagram account, which has more than 2,000 followers. On any given day, she might take pictures of striking flowers and insects, fruits and vegetables, Monticello’s interior spaces, arresting cloud formations, sun-dappled trees and sweeping vistas of nearby mountain ranges.

“I have a unique point of view as someone who has intimately known and worked in the landscape of Monticello for several years,” Gould says. “I often want to capture a bloom at its peak, or a special seed-pod just when it’s right at its ripeness. So many of the details are fleeting; it’s nice to tap into these details that I’ve grown to look for. You start to see patterns.”

Monticello’s curator of plants, Peggy Cornett, says that Gould’s photographs inspire and challenge her “to see those flowers, trees, vistas and sky anew.”

During her graduate work, Gould took part in the Historic Landscape Institute, a weeklong program run jointly by Monticello and UVA that uses Jefferson’s landscapes as outdoor classrooms. “I was drawn to the hands-on, experiential aspects of gardening—and was blown away by the idyllic landscape,” she says.

One of Gould’s favorite tasks at Monticello is leading tours of the Revolutionary Garden, which grows more than 100 varieties of heirloom fruits and vegetables that were once Jefferson’s favorites—like Alpine strawberries, Marseilles figs and Indian Blood Cling peaches.

The heirloom fruits and vegetables are also a favorite subject of her photography. As with Gould’s work at Monticello, it is the interplay of discovery and loss, the permanent and the vanishing, that attracts her to them.

“A lot of the biodiversity that Jefferson knew has been lost,” Gould says. “At Monticello we have an opportunity to remind people of heirloom varieties that have not yet vanished. Sharing these glimpses is thrilling for me. Knowing that others are experiencing it with me helps me feel engaged and present.”