New Clocks for the Rotunda

You may notice something unusual on the faces of the Rotunda clocks: The faces use “IIII” to represent 4 o’clock on the dial.

Bob Desrochers, an expert clock and watchmaker who is consulting with the University on new clocks for the Rotunda, says “IIII” is, in fact, customary.

“The reason you see IIII, and not IV, is due to a royal decree centuries ago that four I’s would balance the right side of the dial with the VIII on the left side of the dial,” Desrochers told UVA Today. “It has traditionally been that way ever since.”

This fall, 3,674 undergraduate students enrolled at UVA as members of the Class of 2019—the University’s bicentennial class. The class is slightly smaller than the Class of 2018, but the number is still on target, says Dean of Undergraduate Admission Greg Roberts. The University overenrolled in 2014; the applicant pool was about the same both years, Roberts says.

The Class of 2019 is more racially diverse than previous classes; nearly one-third of first-year students self-identify as being from a minority background. About 54 percent of the class is female, and there are more than 300 first-generation college students. The bicentennial class also has a strong international student contingent: Just over 5 percent of the Class of 2019 comes from 76 foreign countries.

“These festivals are really important because they expose films that wouldn’t get a theatrical birth otherwise in this community, but they can help launch a film, launch word of mouth and help critical appreciation.”

—Film critic and historian Leonard Maltin, to WVIR-TV News, during UVA’s 28th annual Virginia Film Festival. Maltin was among guests including actress and director Meg Ryan and producer Oliver Stone who joined the record crowds that enjoyed more than 120 film screenings at the four-day festival.

A Familiar Face Returns to Grounds

Longtime CBS News correspondent Wyatt Andrews (Col ’74) will begin teaching at the University as a professor of practice—a non-tenure-track faculty position reserved for eminent professionals—in the department of media studies next spring. 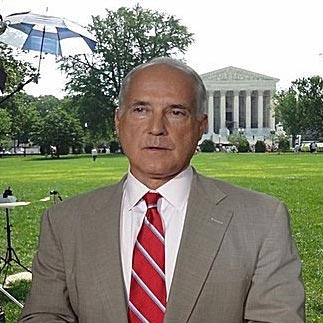 Andrews has said he is both honored and grateful for the opportunity to help future generations of writers and reporters understand the revolution that is transforming the news media and see how they themselves might help shape that revolution.

Andrews retired from CBS in September after a distinguished career in broadcast journalism that earned him three Emmy Awards for his coverage of the following major events: the 1984 assassination of Indian Prime Minister Indira Gandhi; the 1986 Reagan–Gorbachev summit in Reykjavik, Iceland; and the 2002 Washington, D.C., sniper case. In 2014, he shared in the Alfred I. duPont-Columbia University Silver Baton Award presented to CBS News for its coverage of the mass shooting at Sandy Hook Elementary School in Newtown, Connecticut.

In addition to teaching courses on news media, journalism ethics and multimedia news reporting, Andrews says he will continue to mentor students interested in careers in broadcast journalism. He has offered guidance to student members of WUVA Media for several years.

UVA does not have a journalism program, but student interest in media studies has grown exponentially in recent years. Five years ago, 20 students graduated with bachelor’s degrees in media studies; this spring, about 200 media studies majors are set to graduate. Andrews, who graduated with a degree in foreign affairs, has said a good journalist knows a bit about everything, and that kind of thinking starts in a liberal arts education.

Over the past few years, professors across Grounds noticed that classes on entrepreneurship filled up (and queued waitlists) every semester.

David Touve, professor in the McIntire School of Commerce and director of the Galant Center for Entrepreneurship, wasn’t surprised by the trend. “Many UVA students demonstrate the qualities possessed by entrepreneurs,” he says. “They’re self-motivated, curious, creative and smart.”

Their interest spurred faculty members to create an undergraduate minor in entrepreneurship.

The program, launched this fall, developed in the entrepreneurial spirit: It formally recognizes a network of classes that many students previously sought out for themselves in the McIntire School, the School of Engineering, the School of Architecture, the Curry School of Education, the Frank Batten School of Leadership and Public Policy and the Darden School of Business. The minor is open to undergraduates of any major.

Before applying to the program, students must take Touve’s startup class for an introduction to the challenges new ventures face in every phase of the startup process, from idea to exit and even failure.

The program seeks to prepare students for roles as founders, funders, policymakers, executives or technologists in the new venture community, roles that “make it possible for an organization to create the sort of impact that has real value, whether measured financially, socially or both,” Touve says.

Senior Vice Provost J. Milton Adams and psychology professor Timothy D. Wilson have collectively contributed more than 70 years of service and scholarship to the University of Virginia. In October, the two received the Thomas Jefferson Award, the University’s highest honor. 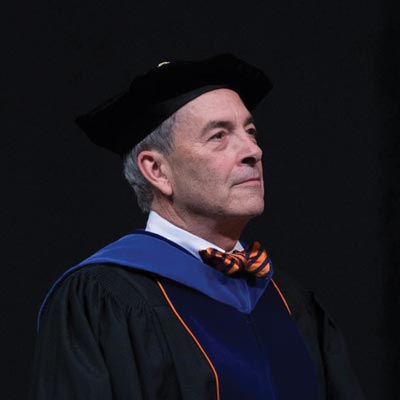 Adams (Grad ’76), who received the Thomas Jefferson Award for Service, has held a variety of administrative roles at the University and helped launch the January Term and the Jefferson Public Citizens programs. He says the award “is an honor of unimaginable proportion,” noting that the list of past recipients includes some of UVA’s most legendary faculty, such as Ken Elzinga, “Boots” Mead (Col ’40), Pat Lampkin (Educ ’86) and many others. 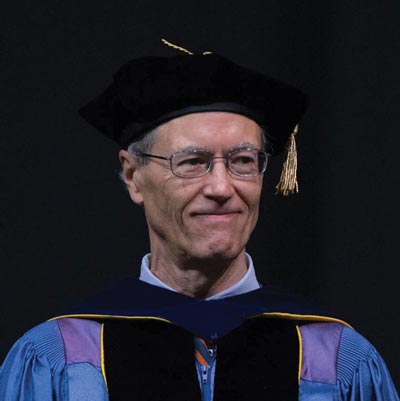 Wilson, who received the Thomas Jefferson Award for Scholarship, echoes Adams’ sentiment that he is not alone in his efforts. “I view this not so much as an individual award, but one shared by all of my colleagues in the psychology department,” he says. “It is the support and stimulation from my colleagues that have kept me going all of these years.” Wilson, a prominent behavioral sciences scholar, teaches the perpetually popular Introduction to Social Psychology course.