Last year and again this fall, UVA was the only school nationwide to have both the men’s and women’s teams advance to the College Cup, soccer’s version of the Final Four. Returning five of their six leading scorers, the women’s soccer team played strong all season, amassing a 23-2 record. The regular-season losses came at the feet of Florida State, which again stymied the Cavaliers when UVA lost the national title game 1-0, to the Seminoles.

“Throughout the season we got better and once we started the tournament, we were playing our best soccer,” says fourth-year midfielder Morgan Brian.

“We didn’t score in any of the FSU games, so you have to say [Florida State] was the better team,” says head coach Steve Swanson. “Tactically, we changed some things the last game and I thought that helped—we gave them our best shot every time, especially in the final.”

After such a successful year, he’s looking forward to next season and hopes for a return to the title game. “We feel really good about the group coming back,” Swanson says. “We’re excited.”

Morgan Brian
by the numbers

When Morgan Brian came to the Cavaliers as the Gatorade National Player of the Year four years ago, UVA fans had high hopes for the talented midfielder. Brian did not disappoint—she finished her collegiate career as the most celebrated player in program history.

19
Games played as a member of the United States Women’s National Team. She was the only collegiate player on the team during last year’s CONCACAF Women’s Championship.
3
Goals scored in international play.
3
The number of times Brian was named NSCAA First-Team All-American. 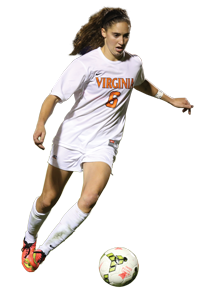 2
MAC Hermann Trophies won, awarded to the nation’s best collegiate soccer player. She is only the fourth woman to win the trophy in consecutive years.
1
Brian’s draft position in the National Women’s Soccer League draft, when she was selected by the Houston Dash with the first overall pick.
41 / 43
Career goals and career assists, respectively, making her the first Cavalier to be a member of the 40/40 club.
Spring 2015 / Sports
Student Life, Sports
View Comments