Advertisers began marketing directly to women in the early 20th century, selling them everything from cigarettes to beauty products to franks and beans. Certain companies, such as Bell Telephone, actually commodified women in the workplace, advertising “Telephone Girls” as part of its service. — Ed.

Over the course of the five decades represented here, companies like General Electric, AT&T/Bell Telephones and General Motors make major technological progress, and they do it quickly. In the 1920s and 30s, General Electric is working to get electricity into all homes in the U.S.; by the 1960s, Bell is advertising speedier phone calls thanks to satellites in outer space. — Ed.

In 20th-century advertising, men were dapper, clean-shaven and almost always smoking. In these ads, men represent all of the major events and themes facing America: war, technology, change. There’s plenty of fun, too, of course. — Ed.

Full-page ads for cigarettes appear in every single issue of University of Virginia Alumni News from the 1930s through the ’60s, until health warnings about smoking slowed cigarette advertising (and consumption) significantly. — Ed.

From Virginia tourism spots to tanning lamps, from board games to Coca-Cola, these miscellaneous ads offer a glimpse into how people may have spent their extra money and spare time. — Ed.

The 1920s, with its many economic successes, saw the rise of advertising as an important part of corporate strategy. Because businesses were introducing many new consumer products, from cars on a mass scale to packaged cake mix, there was an emphasis among advertisers on creating a personal connection between consumer and product.

With the Stock Market Crash of 1929 and the ensuing Great Depression, many large corporations turned to more defensive strategies. One such strategy was to remind consumers that despite tough times, these companies were their friends. Another was to emphasize the value that their products provided in tough times.

World War II provided a great opportunity for advertisers to reverse the image of big business, which had suffered during economic hard times. Business and its products were now associated with America’s winning ways and weapons during the war. Scientific expertise was especially credited with this success as increasing emphasis was placed on higher education.

The Cold War dominated American life after World War II. Besides scientific expertise, with the baby boom, the family was now seen as a crucial defense of the American Way. It is worth noting that at the very time that African Americans mobilized to demand full rights as citizens, there is very little representation of this population in the advertisements displayed in mainstream publications. This would not begin to change until the last third of the 20th century.

Check out BackStory's episode on advertising in America. 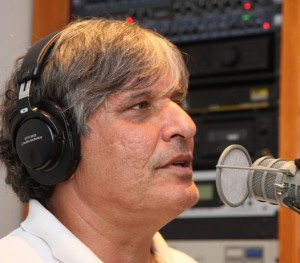 Brian Balogh is a professor in UVA’s Corcoran Department of History. He founded the Miller Center National Fellowship and currently chairs that program. He is also the co-host of BackStory with the American History Guys, a nationally syndicated radio show that runs on Public Broadcasting Stations across the country. His most recent book is A Government out of Sight: The Mystery of National Authority in Nineteenth-Century America.

In 1963, when I entered UVa, every week the Cavalier Daily ran a column written by humorist Art Buchwald and sponsored by Marlboro cigarettes. That year we won a television for our fraternity house by collecting God knows how many cellophane wrapping strips from Marlboro packages. We pledges were given quotas which meant much searching through trash cans around the Grounds.

I was on the staff and later Managing Editor of the University Magazine from 1960-63. I was also the Marlboro rep For UVA during that period. Most of our ads came from the Corner and Mens clothing stores like ElJo and the Young Men shop. Smoking was really in and I gave away thousands of small packs of Marlboro, Alpine and Philip Morris cigarettes. I secretly smoked Pall Malls when my boss wasn’t around

I started at UVa in 1952 (Kent House), and remember learning to smoke and
drink bourbon. I was impressed by the amount of cigarette advertising in the
early years. I finally stopped in 1972, but it helped me through a lot of stress,
including the Army. It’s finally prohibitively expensive.

In 1954, when I started at UVA,  they passed out free packs of 4 smokes all over the grounds. That was advertising at that time that didn’t show up in the news.

Interesting collection focusing on an interesting topic. As I tried to identify some of the celebrities - without reading the names - I began to compile a short list of “celebrities” who were created by the advertising in which they appeared. Johnny the Bellboy (who famously gave the “Call for Philip Morris”), Ronald McDonald, and, of course, the Marlborough Man mentioned in the article, are three examples of advertising creations that assumed a kind of real-life stature. How many others might be added to the list?

I’m intrigued by the presence of ads aimed at woman who read the University of Virginia Alumni Magazine, from as early as the 1930s, when only a small percentage of the University’s alumni were women.  I believe that at that time, women were only admitted to education, nursing and a few graduate programs.

Great to see all this Brian. Are these ads a fair representation of the categories of advertisers in the old Alumni News? I’d like to see more ads from other categories— appliances, autos, other transportation, tourism/hospitality, real estate development and other categories that don’t make much of a showing.