The Honors of Honor

A look at Final Exercises past

This weekend, more than 6,500 students will wear “the honors of Honor” and graduate from the University of Virginia. Here, take a look back at how Final Exercises have been celebrated over the past several decades, from barbecues to drinking from the loving cup and, of course, walking the Lawn. 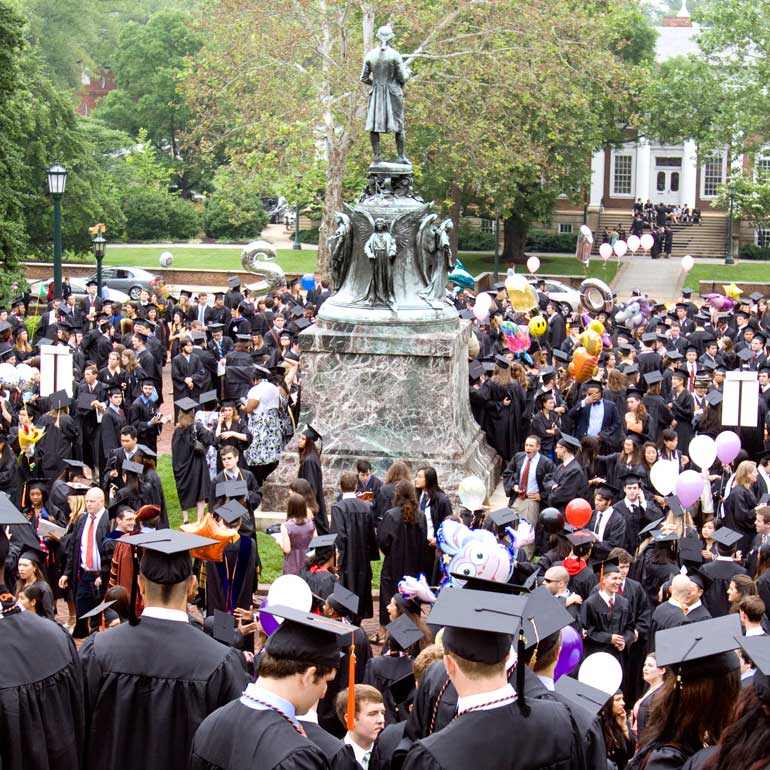 Return to Intro
Back
Forward
1 of 58
Moses Ezekiel’s Jefferson Statue, 1910
After the 1910 commencement exercises in Old Cabell Hall, graduates and guests gathered to witness the dedication and unveiling of a statue of Thomas Jefferson by the artist Moses Ezekiel. The statue was installed in the landscaped plaza on the north side of the Rotunda. Ezekiel also created “The Homer Group” or Homer and His Guide, which was unveiled on the Lawn on June 10, 1907.
Courtesy Coy Barefoot
Finals, 1921
McIntire Amphitheatre during graduation and Final Exercises, with Cocke Hall in background. Centennial year.
Courtesy Special Collections
Finals, 1934
In this postcard image, graduates gather on the steps of the Rotunda.
Alumni Association archives
Memorial Gym Celebration, 1937
Celebration in Memorial Gymnasium during graduation and Finals weekend.
Courtesy Special Collections
FDR at 1940 Graduation
Then U.S. President Franklin Delano Roosevelt addresses the Class of 1940 at graduation.
Alumni Association archives

From “The Hand That Held the Dagger,” in the Summer 2013 issue of UVA Magazine:

What should have been a joyous day for President Franklin D. Roosevelt that June morning in 1940 had taken an unexpected turn: Italy declared war on Britain and France, thereby entering World War II.

Aboard a train from Washington, D.C., to Charlottesville, an incensed Roosevelt pored over several typed pages—last-minute additions to the speech he would deliver that afternoon during the University of Virginia’s Final Exercises. Among the 497 graduating students was his son, Franklin Jr., who was graduating from the UVA Law School.

Walter Ridley, 1953
Walter Ridley (Educ ’53) was the first African American to graduate from UVA. He earned a doctorate in education with high honors.

Courtesy Special Collections
Finals, 1958
In 1958, 813 graduates received degrees. Finals speaker Francis Pendleton Gaines, president of Washington and Lee University, told the crowd, “America is in a sense of shock. It is because we have lost something we took for granted, something of utmost importance. We have lost the cult of our invincibility.”
Alumni News, July–Aug. 1958

Finals, 1962
Viscount Kilmuir, Lord Chancellor of Great Britain, speaks at Finals to the candidates for degrees. In his speech, the Lord Chancellor said, “You carry with you my warmest wishes not only for your success but that all who meet you will recognize you as worthy of the great University from which you graduated. I can wish you nothing better, nor could all your ambitions include a higher hope.”
President Shannon conferred 957 degrees—an all-time record at the University, breaking the previous record of 936 degrees awarded in 1950.

The University also changed its usual graduation practice this year: After the president conferred all degrees in a ceremony on the Lawn, the graduates went to separate assemblies conducted by their schools and received their diplomas from their deans.

Finals, 1963
Students receive their degrees.
Courtesy Special Collections
Finals, 1963
Spectators on the Lawn during graduation and Final Exercises.
Courtesy Special Collections
Female graduate receives her diploma from Dr. Kenneth Crispell, 1963
UVA School of Medicine graduation ceremony.
Courtesy Special Collections
School of Nursing, 1971
1971 graduates of the School of Nursing pose in front of the Rotunda.
Courtesy Special Collections
William F. Buckley, 1972
William F. Buckley, founder of the National Review, was Finals speaker in 1972.
Corks & Curls
Lady Bird Johnson, 1973
Former first lady Lady Bird Johnson gave the commencement speech in 1973, telling the crowd of 15,000, “Don’t despair of America.” Johnson also presented diplomas to Law School graduates (including to her son-in-law, Charles S. Robb [Law ’73]) in the third still above.
Alumni News, July–Aug. 1973
Finals in U-Hall, 1976
This year, Final Exercises took place in University Hall due to inclement weather.
Ed Roseberry
Here Comes the Sun, 1977
Finals were held outdoors for the first time in three years in 1977. The number of graduates totaled 3,123.
Alumni News, July–Aug. 1977
Thurgood Marshall, 1978
U.S. Supreme Court Justice Thurgood Marshall delivered the commencement address in 1978, telling the graduates, “It is hard work being well-informed, but it is essential work for the citizens of a democracy.”
Alumni News, July–Aug. 1978
Yipee, 1978
Scenes from Final Exercises, 1978. One graduate pasted “Yipee!” on her mortar board.
Corks & Curls
George H. W. Bush, 1981
Vice President George H. W. Bush gives the commencement address in 1981.
Courtesy Special Collections
Ralph Sampson, 1983
UVA basketball legend Ralph Sampson (Col ’83) towers above the crowd during a rainy 1983 graduation.
Dan Grogan
Legacy, 1984
Three generations of alumni after the Finals ceremony: Benjamin K. Symmers Jr. (Engr ’84) with (left) Benjamin K. Symmers Sr. (Col ’63) and William G. Symmers (Col ’33, Law ’35).
Uncredited
Loving Cup, 1985
At the end of the valediction ceremony, Sen. John Warner (Law ’53)and class president Glenn P. Williamson (Col ’85) (far left) pass the mint julep-filled loving cup to class fundraising chairman Joseph A. Ruzecki (Col ’85). University President Hereford, having taken his sip, looks on.
Michael Bailey
Nurses, 1985
Nursing School graduates at a ceremony on the Lawn.
Alumni News
Loving Cup, 1986
David Rainey (Com ’86) drinks champagne from the loving cup at the 1986 valediction ceremony.
Sloane Lederer
Lonely Loving Cup, 1988
A downpour leaves the loving cup all alone at the 1988 valediction.
Bill Sublette
Shorts, 1988
Many graduating students favor shorts under gowns to keep cool during the ceremony.
Ron Radcliffe
Snake, 1988
Med student Michael Anderson graduates in style, complete with boa.
Gerry Brunk
Hullabahoos, 1989
The Hullabahoos perform at the 1989 valediction.
Alumni News, July–Aug. 1989
Jesse Jackson at Finals, 1992
The Rev. Jesse Jackson applauds as graduates march down the Lawn at graduation and Final Exercises.
Courtesy Special Collections
Little Girl, 1993
A little girl wears the cap and gown of a graduate during graduation and Final Exercises.
Courtesy Special Collections
Class of 1995
[No caption]
Alumni News, Summer 1995
Beta Bridge, 1995
A message from the Alumni Association to the graduating class.
Alumni News, Summer 1995
Finals, 1999
The view from Old Cabell Hall at graduation and Final Exercises.
Courtesy Special Collections
Class of 2000 Women
Graduates celebrate with their professor.
Courtesy Special Collections
A Sea of Graduates
The Class of 2000 processes down the Lawn.
Courtesy Special Collections
Living Wage
Some graduates from the Class of 2000 supported the Living Wage Campaign, pushing for UVA workers to receive $8 per hour. In Nov. 2000, the University raised the minimum wage from $6.50 to $8.19.
Courtesy Special Collections
Bubbles, 2001
Michelle Le (Col ’99, Grad ’01) blows bubbles in celebration of her graduate degree.
Vicky Carter/Corks & Curls
9/11 and the Class of 2002
Some members of the Class of 2002 honored victims of the September 11, 2001, terrorist attacks, which occurred in the fall of their fourth year.
Corks & Curls
Deans March in 2002
Several deans walk the Lawn, including, starting second from left,  Robert M. Carey, dean of the School of Medicine; John C. Jeffries Jr., dean of the School of Law; and Edward Ayers, dean of the College of Arts & Sciences.
Courtesy Special Collections
On the Phone
A 2007 graduate chats on a cell phone.
Corks & Curls
Rising Above the Crowd
A 2008 graduate gets a boost to take in the scene.
Corks & Curls
Diplomas, 2012
A stack of diplomas prepared by the Office of the University Registrar will be handed out at a departmental graduation ceremony.
Cole Geddy
Katie Couric, 2012
Katie Couric (Col ’79) was the commencement speaker in 2012. She joked that it took 33 years for UVA to invite her to speak at Final Exercises. “I guess it took the first woman to lead the University in 193 years to get the job done,” she said of President Sullivan.
Cole Geddy
Ceremony Set-Up, 2013
Workers set up chairs for Final Exercises. More than 30,000 people attended the Lawn ceremony in 2013.
Cole Geddy
Teresa Sullivan, 2013
President Teresa Sullivan high-fives graduates during Final Exercises. The previous summer she received a groundswell of support from students, faculty and alumni when she was forced to resign and then was reinstated by the Board of Visitors.
Cole Geddy

Dean Allen Groves, 2014
Dean of Students Allen Groves gives graduates high fives in 2014. Dean Groves broke the world record for most high-fives in one hour in 2013.

Dan Addison
We Have Jobs/Employed in My Field, 2014 and 2015
In 2015, the job market was the best it had been for UVA students since before the Great Recession.
Sanjay Suchak
Plus ça change
Students gather around Moses Ezekiel’s Jefferson statue before walking the Lawn in 2010.
Jane Haley