James Dean Erickson (Col ’08) was a 2008-2009 Aunspaugh Fellow at the studio arts department. He paints large format portraits of people he meets on or near Grounds. Over the past two years, he has also offered his own home as temporary shelter to friends he makes among the homeless community. “I view my painting as an act of gratitude to the people who have an influence on me,” says Erickson. This summer, he will travel in Italy before pursing graduate studies at the Pennsylvania Academy of the Fine Arts in Philadelphia. 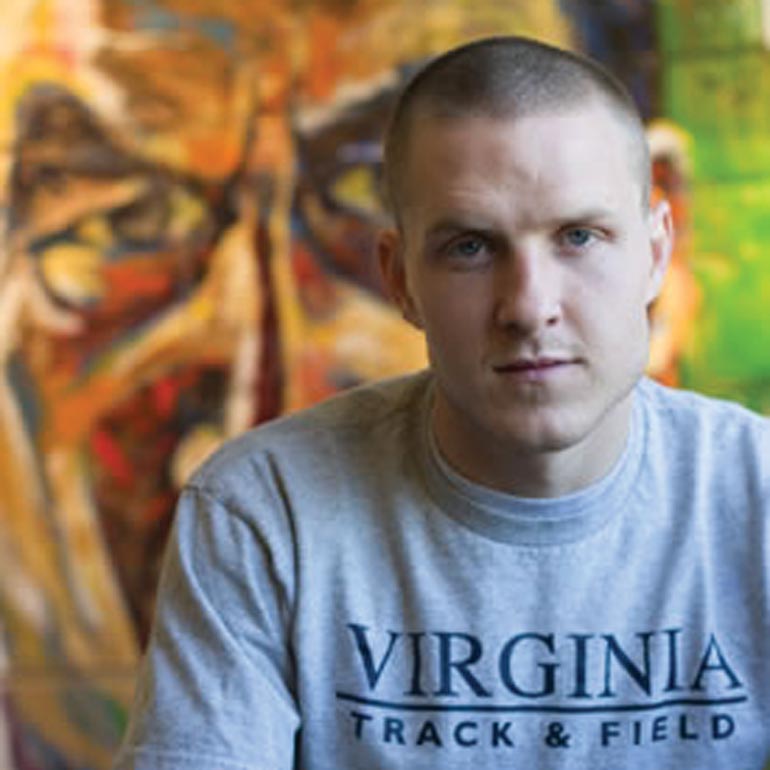 When Erickson first saw him, Seven was walking with a staff and a bible down a Charlottesville street. “He is a spiritual provider for the underprivileged,” says Erickson. “He never says, ‘I think,’ but instead says ‘God tells me.’” In 2007, Erickson briefly shared his Lawn room with Seven. “Every day, Seven would challenge me with his thinking about theology,” says Erickson. “I tried to capture his spirituality in my portrait of him.”

This portrait of Jay was the first in a series of large format portraits of men that Erickson hosted in his own living space. Originally from Michigan, Jay was in Charlottesville for the summer of 2007. “I felt like knowing Jay, I got to watch him move from darkness into light, his life turned around,” says Erickson. Jay now lives in Illinois and works in construction. “The scale and color of this portrait allowed me to express my gratitude toward him. It’s like a thank you letter,” says Erickson.

Erickson met Tommy on the Corner. “He was a familiar face for students until he passed away last fall,” says Erickson. Tommy stayed with Erickson in his Lawn room for a while. “The Lawn is traditionally a place of welcome for visitors, tourists. I felt like I could offer a place of rest in my room and built a bunk loft with help from a friend,” says Erickson.

Kwaku, originally from Ghana, works as a sandwich maker at Little Johns on the Corner. His wife’s graduate studies brought him to Charlottesville along with their three children. “He’s an artist and makes clothes and jewelry that he sells at the Charlottesville City Market,” says Erickson. “I admire the struggle that he goes through to support his family and his peaceful, mellow presence.”

Born and raised in Charlottesville, Eddie is an advocate for the homeless and lived briefly with Erickson on the Lawn. “He’s very intelligent, a member of Mensa,” says Erickson. “He taught me to think about social problems in a practical way. My approach has always been artistic and relational. He taught me a lot about the reality of housing and poverty and the concrete things that can be done.”

Erickson met Jack through “On Our Own of Charlottesville” on Fourth Street. A poet and thespian; Jack is another who lived with Erickson. “He demonstrated the creative process with words, turning life experience into articulated thought in an aesthetically pleasing way,” says Erickson.

In the early morning, Erickson saw Paul and Jeff sharing breakfast behind Elliewood Avenue. “The moment of gentle stillness in this disheveled environment struck me,” says Erickson. Erickson invited his subjects to title the piece and attach the title to the painting itself.

James spends time under the train bridge at 14th Street and University. “He calls out to people, reminds them to smile. Such a simple vocation,” says Erickson. James titled the painting, “This is Life at Its Best.” “I like that title because James was explaining what fulfills him, what makes him happy, and [it] confounds some of the expectations people might have about an image like this,” says Erickson.

Mira emigrated from Croatia and works in housekeeping at Ruffin Hall, the new studio art building. “She is there for long hours every day. She is like a mother to all the art students, feeds us, takes an interest in our work. She has a lot of wisdom about the world that we totally lack because she lived through war,” says Erickson. Mira titled the work in Croatian; Moj Kruh Svagdasnji translates to “My Daily Bread.”

Cora works as a sandwich maker at The Castle, on the lower level first floor of Bonnycastle dormitory. “At first, she was hesitant about being painted in her work uniform,” says Erickson. “But one of the things that I really admire about her is that she finds the path to peace through work, does everyday things for the glorification of God.”

When Erickson saw Jimmy outside White Spot, he was stuck by his extraordinary face. “It revealed that he’d lived an unusual life. He’s a traveler,” says Erickson. “I really believe that there are extraordinary things to be discovered about everyone. You just have to find a common language, a conversation, a painting, something.”